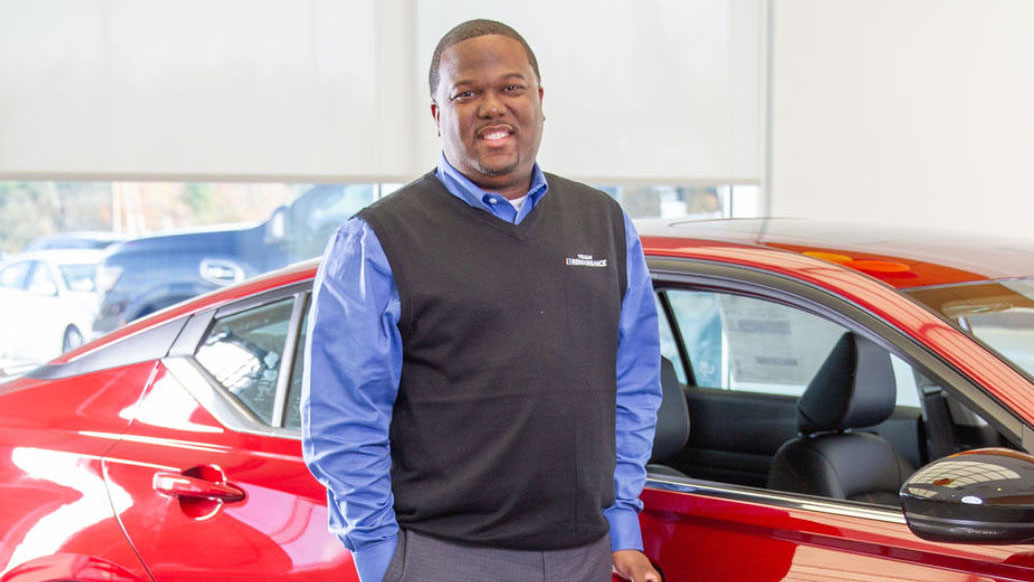 On July 17, 2020, Jamar Brinkley did something remarkable. At a time when the entire automotive industry was reeling from the impact of COVID-19, Brinkley took a leap of faith and opened the doors of his Nissan dealership for the very first time.

“I am a person who’s a strong believer in faith,” Brinkley said. “When you walk by faith, you don’t look at the things that are in front of you. My attorney and one of my financial advisors both said the same thing. Why would you risk everything you have in order to do this? And I kept telling them, this is the business I was led to, and I’ve got to be obedient.”

That business is Renaissance Nissan, located in Roanoke Rapids, North Carolina near the Virginia border. Although his advisors may have had questions, there was no doubt he had the complete confidence and support of his wife, Jenelle, and their two young boys, aged 8 and 12.

“I actually think my wife is more excited than I am,” he said.

He found himself leaning hard on his faith in order to remain upbeat and optimistic in the early days after his store’s grand opening.

“The first week was pretty scary,” Brinkley said. “We didn’t sell our first car until July 22nd. But once the first opportunity happened, it just started rolling from there. Right now, business is good. It’s definitely going in the right direction.”

The North Carolina native got his start in the automotive industry in 2003. A college sophomore and member of the National Guard at the time, his unit was called upon to join the effort in Iraq. Prior to deployment, he withdrew from college and quit his job, only to receive an unexpected “no go” from the military due to a health issue. While his buddies went to Iraq, Brinkley found himself out of school and out of a job.

He immediately returned to his studies at North Carolina Central University, but rather than going back to his previous job, he decided to pursue a dream instead.

“I always had a passion for cars,” he said. ”I went through a telephone book and found the dealerships. The first one I looked at wouldn’t hire me. I went to the next dealership, ended up going for an interview, and they hired me on the spot.”

Brinkley spent the next eight years with Hendrick Durham Auto Mall, learning the ropes as a salesperson, and quickly rising through the ranks soon after graduating from college.

“I grew up with the Hendrick organization,” Brinkley said. “I started as a salesperson and was promoted shortly after finishing school. I had the opportunity to be Finance Manager, New Vehicle Sales Manager, Director of Financial Services, and General Sales Manager.”

“I met Jenelle when I was Finance Manager with the Hendrick Group,” he said. “She saw all the time I put into it, and that my dream was always to be a DP.”

Despite his series of successes with Hendrick, he felt the need to achieve more.

“I always had the aspiration to go to that next level,” Brinkley said.

The answer came in 2011 when he met Damian Mills, CEO of Mills Automotive Group, and owner of dealerships throughout North Carolina, South Carolina, and West Virginia. Mills ended up recruiting him, and over the next six years, Brinkley operated Mills dealerships in Statesville and Goldsboro.

During the years they work together, Mills became Brinkley’s friend and mentor. Even after he decided it was time to venture out on his own, Brinkley still asked Mills for advice on business matters. It’s a practice he values to this day.

“I probably talk to Damian a couple of times a week, just for different advice and pointers,” Brinkley said. “Even though we’re in competition with each other, our friendship was fostered throughout the time I worked for his organization. We definitely have a very good relationship, and I’m proud to continue our relationship.”

“A mentor is a sounding board,” he said. “It’s probably the biggest thing, because as you run into the obstacles that you might encounter in any business venture, you want someone you can bounce ideas off of. Someone who can point you in the right direction. If you have someone you can communicate with, and be a sounding board for you, I think that’s one of the most important assets you can have. Without it, you’re kind of lost out there.”

In 2016, on his own for the very first time, Brinkley was inspired to name his new company “Renaissance Cars,” because he knew that “renaissance” means “rebirth.” His vision was to help customers purchase vehicles remotely, similar to what dealers are doing today in response to the coronavirus.

“It was a concierge service, which allowed me to assist customers with buying cars without actually being in a dealership,” he said. “We were also doing accessory sales, like window tint.”

It was during this time that he began working with iA American's Southeast Sales Division, which enabled him to offer his customers finance and insurance (F&I) products to protect their vehicles and enhance their value.

Several years after operating Renaissance Cars, Brinkley once again felt a calling to start over. When he was presented with the opportunity to purchase his own Nissan dealership, he put his trust in a higher power and jumped in with both feet.

Today, Renaissance Nissan provides its customers with everything from new and pre-owned vehicles, to competitive financing options, to ASE-certified maintenance and repair.

When Brinkley needed his own customized certified wrap program, iA American jumped into action, and built his program from the ground up in record time, complete with the Renaissance logo. Brinkley knows he can always trust iA American to understand his vision, and create the customized F&I products he needs to support his dealership.

Taking the concept of full service to the next level, Brinkley is now pursuing his Property & Casualty license, and hopes to eventually offer affordable auto and homeowner policies to Renaissance Nissan’s customers, right in the dealership.

Although Brinkley always welcomes traditional customers into his showroom, he is also committed to serving every customer, no matter where they might be. Renaissance Nissan’s concierge service continues Brinkley’s history of providing sales and support directly to the customer’s home or business.

“Typically, the customer who is going to the concierge side is a younger customer, while someone who prefers the traditional way is an older customer,” Brinkley said. “The benefit is really their benefit, and what they find value in. We try to appeal to both sides.”

“The Renaissance To-Go experience allows us to perform the entire process outside of the dealership,” he said. “This includes F&I vehicle protection products. We put the customer in contact with our Finance and Insurance team, they go through entire menu presentation for the vehicle with help of Dealertrack,  and capture it right there in their email or on their phone. Two of the deliveries we made this weekend were for customers who experienced that.”

Starting in 2021, Brinkley plans to dramatically expand his concierge service, and provide a selection of mobile services that previously required visits to the dealership.

Brinkley employs 19 people throughout his dealership, and takes his responsibilities as an employer and community leader very seriously, as is evidenced by the “Renaissance Careers” and “Renaissance Cares” sections of his website.

For those seeking employment at Renaissance Nissan, Brinkley always has a certain type of individual in mind when he has an opening.

“Really and truly, it’s more about will and desire than it is about skill,” he said. “It’s more about the person’s personality, the person’s attitude, and the willingness to persevere through adversity. Those are some of the key indicators that I look for whenever I hire somebody. Someone who’s not just looking to come in and have a title, but someone who’s willing to do the grunt work to get to that level.”

“One of my philosophies is to always be approachable, no matter what role or position I hold,” Brinkley said. “I learned that early in my career with the Hendrick Group. No matter how big you are or how successful you may be, understand that your people are your greatest asset. And if you understand that concept, and are always there for them, you’ll have a team that you can trust. Being there for my people is always my number one priority.”

When it comes to using his business to help his community, he doesn’t need to look any further than his own grandmother for inspiration.

“Part of my aspiration and my wife’s aspiration, was to always give back,” he said. “Growing up as a young boy, my grandmother started some food pantries in the community where she lived. And I always said, whenever I had the opportunity, I wanted to carry on my grandmother’s legacy. And being able to give back to the school system, so someone else can have an opportunity when they otherwise wouldn’t get one, I think is also very important. That’s why we created Renaissance Cares.”

Clearly, Brinkley is pouring his heart and soul into making Renaissance Nissan a success. Currently, he works 12-hour days for six days a week, up at 5:40 a.m., to bed by 11:30 p.m. Sunday is his only day off.

Still, as grounded as he may be, his own children think that having a car dealer for a dad is pretty special.

“My oldest son definitely gets excited about the entire process,” Brinkley said. “He sees a legacy that can be left behind. He sees the vision.”